The Chancellor announced a number of key measures in the latest Autumn Budget, designed to support the property market.

This includes a 2 year extension, until March 2023, of the government’s flagship ‘Help to Buy’ equity loan scheme. Since its introduction 5½ years ago, Help to Buy has assisted over 169,000 purchasers, 81% of which have been 1st time buyers.

Under the current scheme, which has two years to run, anyone buying a new-build is eligible for the loan which is £600K in London and £400K across the rest of England. However, from 2021, only first-time buyers will qualify and the Chancellor has introduced regional price caps to reflect average property prices by area. London keeps its £600K limit, whilst the other main regions range from the lowest cap being in the North East at £186,100 to the South East which will be £437,600.

Another and very notable Budget announcement was the abolishment of stamp duty for first-time buyers of shared-ownership homes, priced up to £500,000. These savings will also apply to those who bought a shared-ownership property within the last year. This, together with the extension of Help to Buy, is seen as a positive and welcome move, which will undoubtedly continue to boost activity at the all-important foot of the market.

The house building sector was also a focus of the Budget with the Chancellor announcing a £500m injection to the government’s Housing Infrastructure Fund. This is designed to allow councils to provide additional grant funding for new homes, with the aim of encouraging development by smaller building firms and unlock the potential of a further 650,000 homes.

The UK economic landscape has certainly been influenced by uncertainty over Brexit implications over the past 2½ years. However, despite this, much of the property market has just got on with its business of buying, selling and letting properties. There’s certainly been much greater caution amongst buyers, but realistic pricing by sellers has been the key to driving sale transactions, albeit the overall level of sales is down by c.10% in the second half of 2018.

Sale prices in the South East have risen marginally this year by around 1% only, which is slightly less than the UK average of 1.6%, as reported in the Nationwide’s House Price Index published in October 2018. It’s quite clear though that the ‘run-rate’ of house price inflation, over the last 3 years, is under quite some pressure. 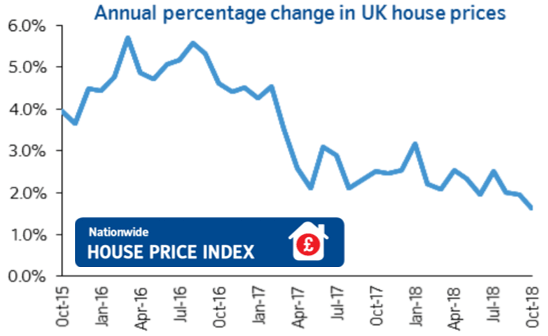 The rental market continues to be quite stable with rent rises during 2018 likely to exceed rises in house sale prices. Most market pundits point towards increases of 2% to 3% for the year. With rents in London still very high, this may well potentially further push up rents in the main South East commuter areas, as greater tenant interest spreads to these counties. Clearly, this is better news for landlords than tenants in our region, but these rises are not predicted to be substantial. It’s also reasonable to assume that, in the current economic climate, not all landlords are going to raise their rents, particularly if they already have reliable tenants.

So what’s the outlook? … no doubt, all attention in the next few weeks is on the outcome of Brexit negotiations. Will the Government pull a deal ‘out of the hat’ and inject confidence back into the market … or are the chances of the UK crashing out of the EU, with no deal, increasing? At the time of writing, the Government are claiming that 95% of the withdrawal agreement is now settled and some reports suggest that a secret deal is on the table, where the UK will remain in the customs union. Whilst all of this is a little detached from the immediate UK property market, the implications are important … getting a good degree of certainty back into the future trading arrangements between the UK and the EU will inject confidence into the business community which, in turn, generates investment and secures jobs. All these factors have a positive influence on the appetite of sellers, buyers, landlords and tenants to move on and commit for the future. We’ll wait and see … !